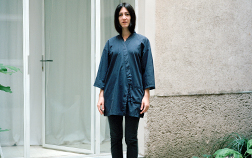 13 Oct AHU DURAL: SHE SEES NOTHING

Ahu Dural (*1984, Berlin) transforms the city space Stadtraum in her exhibition She Sees Nothing into a space-consuming installation. The starting point is the continuation of a quotation by Beatriz Colomina of a text fragment, which is also the title of the exhibition. “Remarkably, she is facing the wall. She is almost an attachment to the wall. She sees nothing”. Among other things, Colomina notes at this point how Le Corbusier has almost exclusively portrayed women whose faces are not recognized or which look towards the wall. She describes a photograph in which Charlotte Perriand herself poses, lying on one of her chaiselongues, her face facing the wall is not looking at the camera.

New feminist genealogies and art history re-contextualisations are used in the works of She Sees Nothing. In this source of inspiration the artist finds reflection in the works of the architects Eileen Gray, Charlotte Perriand and Jeanette Laverrière, as well as an artistic way of working, which can be experienced on both a sensual and haptic level. The parameters of the artist’s method and employment points become clear very quickly: space – actors – drawing.

In the works of Dural the perception of space in the exhibition concept, as well as drawing as a necessity of productive activity, plays an important role. Just as she summons space from paper to the actual exhibition space, her presentation works change the state from a two-dimensional drawing to an object front, just as vice versa, objects in the room can operate as a graphic for the artist. In the process of working on material, on paper, in the form of repeated processing of work patterns, the artist creates a drawing front and, in the sense of the concept, hybrid objects that are enrolled in the architecture.

At the same time, both the user and viewer’s participation is activated by looking at the installation and objects from different segments of the room. Positioning and perspective as an element of artistic work, however, also mean the autonomous and self-determined re-writing of this viewer position, which was shaped and determined in 1960s Minimalism. One can think of an active audience who sees sculpture that implicates them, becomes generative and opens the mind. The exploration of space and movement thereof around the objects open up the viewer’s interplay created by Dural by the inscription in the gallery space. The single drawing transformed through distance to an object front on the wall, the step into the space explains the streak in the mass of drawings in the form of the legs of the high table objects. Specific objects, which intersect between the object and the painterly moment, emerge in the process. In the White Cube, objects of the Perriand 50s interiors are stretched in length, pulled up and reduced to the moment of vision.The moment of non-seeing in She Sees Nothing, the too-high tables or benches, the too-high atelier, an interior ensemble with too-high objects, the spatial architecture and position of the objects focus the view repeatedly towards the height. The movement in the space encourages the viewer to pose the question of perceptibility: What is the relationship between the strokes and the visual axes, what appears in the field of view, and what associations are there?

Ahu Dural was showing objects and drawings in the Stadtraum and presented an artist lecture on her work in February 2017.