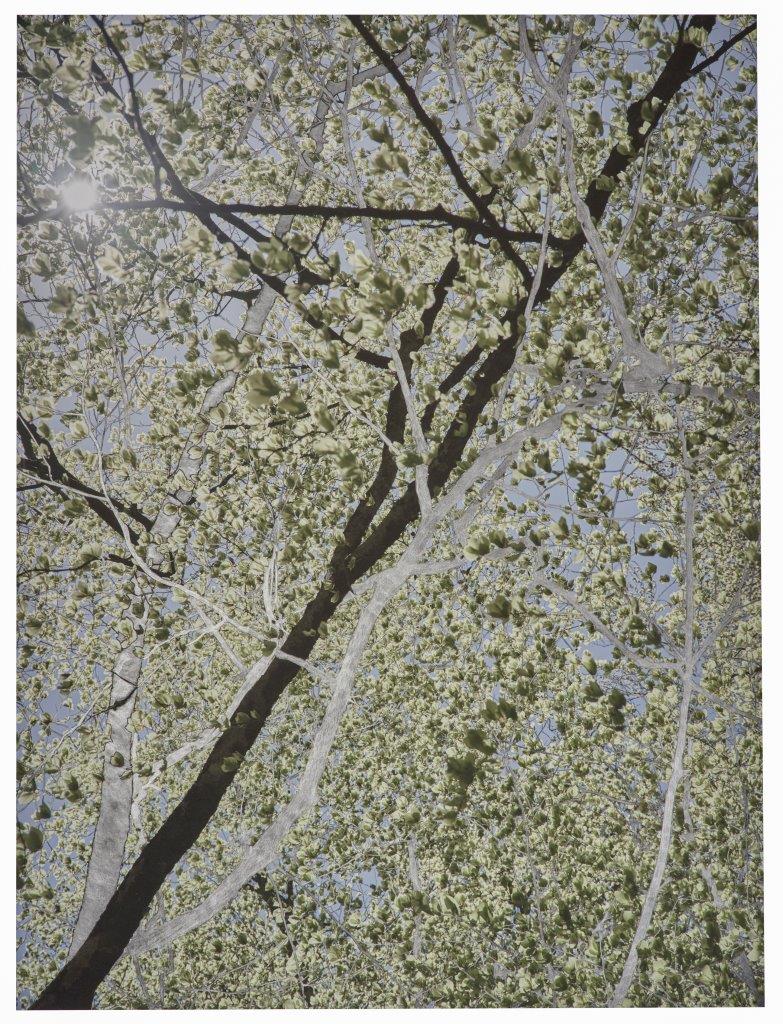 Posted at 18:18h in PAST by Marcello Farabegoli

At the opening the new monograph Imbroglio (Skira 2021) by Adrian Burns was presented.

The exhibition Metamorphosis of Plants, whose title is inspired by Goethe’s 1790 botanical essay, offers an immersion into woods, deserts and forests through the eyes of Austrian artist Sofia Goscinski and Mexican photographer Adrian Burns. Travelling through their gazes, and their chosen media — sculpture, painting, and photography — nature is a subject of pictorial experimentation. On the way, as we witness their metamorphosis and imprint on art, we become aware of our relationship to all living organisms. Goethe suggested a “secret relation subsisting between the different external organs of plants, such as leaves, calyx, corolla, and stamens.” Thirty years later, inspired by Goethe, Indian biologist Sir Jagadish Chandra Bose made several pioneering discoveries in plant physiology (The Nervous Mechanism of Plants, 1926), notably that plants are also capable of discriminating between positive and negative experiences and of learning by registering memories from their past experiences and use this information to adapt their behaviour to survive present and future challenges in their environments.

Burns’ leafy imbroglios are made up of sensitive, sensible organisms, whereas lone trees are portraits: “A tree is like a person; it has moments of wakefulness, of sleep, cycles, introversion, extraversion.” A thought that recalls Goethe’s, “the true Proteus who can hide or reveal himself in all vegetal forms.”

Like English painters Paul Sandby (1731-1809) and John Constable (1776-1837) or today Thomas Struth, Burns has been gripped by trees, walks among them — they are constant companions. Perhaps at the root of this affinity is his early education at the Putney School in rural Vermont, which reads like a page out of Henry David Thoreau’s Walden. There, students were on equal terms with nature, living, in their senior year, in student-built cabins in the middle of the woods without electricity or water, fetching wood in the dead of winter, knee-deep in snow. Studies included carpentry, sculpture in metal, wood, marble, ceramics, drawing, painting, and photography, which soon became Burns’ passion.

A more recent sojourn in Montgiroux, France, where Burns stayed during the first Covid-19 wave in March 2020, was a déjà-vu of the Putney experience forty years earlier in that one had to be self-sufficient, depend on local resources from neighbouring farms, chopping wood and baking bread in an outdoor oven. Like in rural Vermont, the seasons passed in slow motion with their minute changes in light, rustlings, murmurs, and movements.

Waking early every day, the artist took long walks in the morning and then again in the late afternoon, “the most interesting time of day for the light […] Walking every day for hours allowed my eye to have a new acuteness, to be aware of how nature works — not just from season to season — but on a daily, even hourly basis.”

One of Burns’ artistic procedures is the use of series, revealing minutely different views of the same motif, such as the successive versions of the intertwining branches of Encounter at Montgiroux or a strand of trees at Verrières-le-Buisson. The sequences are numbered, indicating that one must look at them one after the next so as to penetrate their distinct language.

But Burns’ work is not purely photographic; most of his recent creative production consists in photographic prints traced over with graphite and/or overlaid with acrylic applied through stencils, generally geometric forms: discs, ovals, curves, triangles scattered, or clustered together, or a luminous vertical strip across the middle of the image. These geometric shapes float above the forest with glasslike translucency, superimposed, spectral figures — anomalies that disturb our gaze.

With works such as the triptych Imbroglio, the operating principle is how the framing moves only slightly from one image to another, just enough to capture the eye. Thus, the aspect of each, viewed in relation to the other, is mobile, nearing or distancing — off-kilter. Burns endeavours to connect these in a voluble, non-verbal conversation.

The roots of Adrian Burns’ art dig deep into the tortuous, torrid beauty of his country, and, as chance would have it, an important initiatory voyage for Sofia Goscinski took her through the stretch of desert on the road between Mexico City and Oaxaca, a terrain of ancestral myths — thus the shared geography of inspiration between the two artists.

The initial reason for the trip was to discover the black Oaxacan pottery: “We made the trip to buy clay from Oaxaca. You can’t get it anywhere else. They treat their pottery like a secret and usually don’t sell the clay, which is very smooth and refined. What’s interesting to me about working with clay is the process. It’s a gestural, expressive, sculptural process. You begin and don’t know where and how it all ends. You start out with an idea, maybe even a clear image, but also a hunch that it will develop into something entirely different.”

The art works that resulted from the Oaxacan trip developed into something quite different, namely the concrete sculptures Desert Plants. Sofia Goscinski’s use of concrete in many of her sculptures shows her alive to the possibilities of a material that can be modelled, carved, and cast in a mould, shaped and added to while soft, or carved when hard. Like other European artists who started using concrete before her, just before the First World War — one thinks of the expressive portrait heads and concrete figures of Wilhelm Lehmbruck — she excels in this matter.

Looking back to her initial inspiration in Mexico: “Clay doesn’t particularly relate to concrete, but still you need sand to mix with cement and water to get concrete. An interesting thought, because sand has to do with desert, and a plant needs water to live. Concrete looks like stone; it is like a fossilized plant. A plant that can no longer absorb water. In this sense, you can say it is a plant’s afterlife, the metaphor of petrification, which I find very interesting.” This recalls how British art critic David Sylvester emphasized the tenuous side of the sculptures of Alberto Giacometti, which he referred to as “fossils” that have remained underground. Goscinski’s rough, arid, stalagmite-like Desert Plants reveal her emulation of the great Swiss sculptor.

There are now bronze versions of Desert Plants, a final stage of refinement, like a monument to the plant.

Sofia Goscinski’s work is manifold, involving performance, photography, installation, both figurative and abstract sculpture. Although it has not been her focus in recent years, during the successive lockdowns between March 2020 and autumn 2021, she also made a number of paintings: “It gave me moments of peace while suffering from depression. It was about observing without judgment, letting go, and reaching a state of ‘Durchlässigkeit’ (permeability, allowance). My painting Kanako contains the spirit of the woods. I named it after a friend; it reminds me of her. She is a wild spirit, a hunter; at the same time, she’s an amazing singer with a beautiful soprano voice — a captivating aura, like the painting. The curved shape in the second painting, Nostalgia, is related to the Desert Plants, the silver, shiny background somehow reminds me of Adrian’s luminous geometric shapes. One can see a female figure, but it could also be leaves curling in the wind and a piece of sky. “

Rabindranath Tagore wrote, “These little thoughts are the rustle of leaves”—with this exhibition nature is an inspiring refuge to reflect, watch and listen through the prisms of two exceptional artists.